Compare all prices on Cannondale models:

Probably best known within mountain biking circles, the Santa Cruz brand is aimed mainly at serious competitors, with a range of bikes that are predominantly carbon framed and therefore lightweight. There are some alloy models at around the £1500 mark, but the majority cost several thousand pounds. Because of their specialist niche and limited number of stockists, there are not many Santa Cruz bikes to be seen in clearance sales, but if you're lucky and quick you might find one.

We've highlighted some popular bikes below: 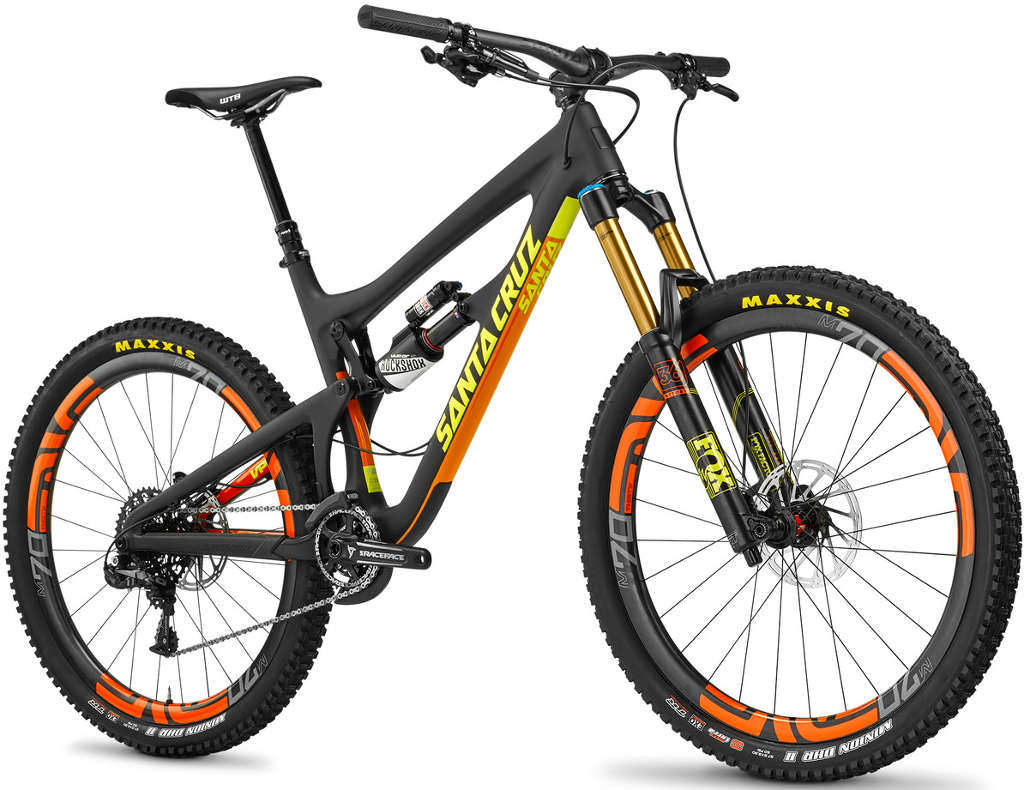 Show all Sales and Deals

We've only found 1 of these bikes at a discount, which is the Santa Cruz Bronson C S Reserve 275 2019 Primer Grey for £5699.99, available at LeisureLakesBikes.

You can still view all bike prices using the link above or the left hand menu.

This range of full suspension bikes suits a mixture of fun and aggressive trail riding, where you want to go absolutely anywhere you like and have the bike just take it in its stride, whatever challenges you put it through. The Nomad and the Bronson are generally characterised by big travel and quite a long mainframe.

You can spend anything from around £2000 up to £6000 for a bike from this range, but don't expect anything other than lightweight carbon and a memorable ride.

Show all Sales and Deals

You can still view all bike prices using the link above or the left hand menu.

This was and is a very popular model in the Santa Cruz Trail MTB range, on account of its short travel and low riding chassis, giving it ultimate stability for those riders who want close control of their machine to carve easily around tricky corners. Just watch out for rocks and rubbish on the trail ! The Santa Cruz 5010 also, as might be expected, climbs well without unwanted fork bounce.

All in all, this is reviewed frequently as a great fun bike to ride and the latest versions have lost none of the benefits of the previous models.

The biggest percentage saving is 33% on the Santa Cruz Hightower LT C S Reserve 29er 2019 Skye Blue/Gold, giving a saving of £1999.01 and on sale at LeisureLakesBikes

These bikes are made for fast and long distance cross-country or enduro racing with a relatively low suspension travel and a longer frame for stability. The Santa Cruz Hightower is a redesign of the Tallboy, but they are somewhat different in their ride qualities. The Hightower is available in both 27.5 and 29er versions, unlike the Tallboy.

You can expect to pay anything from £2500 to £6000 for one of these bikes, depending on the specification, so they are definitely for cyclists wanting the ultimate in big mountain trail riding.

You can find 4 discounted Santa Cruz Highball bikes currently on sale, including the Chameleon D 27.5 2019 Mountain Bike Orange - L for £1615.0 and the Santa Cruz Chameleon S 29er Mountain Bike 2019 Slate Blue for £2499.0. Evans Cycles,  LeisureLakesBikes,  have some clearance sales on these bikes.

The biggest percentage saving is 23% on the Santa Cruz Chameleon R 29er Mountain Bike 2019 Orange/Blue, giving a saving of £599.01 and on sale at LeisureLakesBikes

This hardtail bike covers a wide specification range from around £2000 up to £5000, depending on the components. The Santa Cruz Highball is available in 27.5, 650b and 29er versions, giving plenty of choice, depending on likely use. In general this bike is designed for fast race, with an elongated top tube and firm, responsive handling to catapult you cross-country, while still being pretty stable on descents.

Buying Parts or Clothes ? - Search these shops in one go: